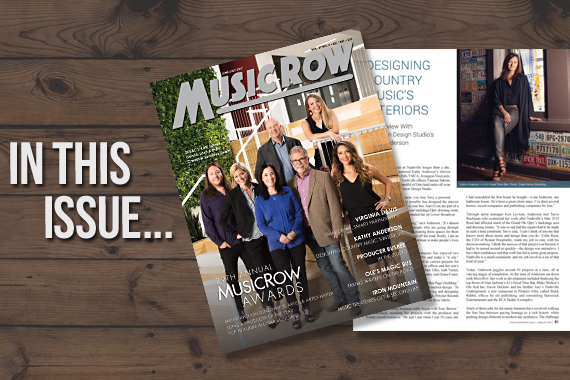 If you’re in the music business, you may have a personal connection to Anderson. She possibly has designed the interior of your home, vacation home or tour bus. And if you are part of a lucky few, Anderson designed your backstage Opry dressing room, private airplane or even your branded bar on Lower Broadway. “My job in involves a lot of listening,” says Anderson. “It’s almost like playing a psychiatrist for people who are going through changes in their lives and you’ recreating these space for them to feel comfortable in when they get off the road. Really, I am an interpreter. I really feel like l can contribute to make people’s lives better and their offices run smoother.”

Celebrating 30 years Anderson’s company has enjoyed two distinct boom in Music City: the 90’s and today’s it city” expansion. Those credits have extended lo various projects for Carrie Underwood (The HQ management offices and her son’s nursery), Kix Brooks (Cumulus office), Pam Tillis, Josh Turner, Steve Wariner, Reba, Vince Gill, Dierks Bentley and Deana Carter. “I started in 1988 on Music Row in the top of Ben Page’s building”, said Anderson, who graduated from U LA in interior design. “At the time the music business was really growing and designing great offices. I did MCA Records, Arista Records, Polydor Records and homes for many or the executives that ran those labels.

“My work in the music business really began with Tony Brown,” she continued recalling her projects with the producer and former record executive. ‘He and I met when I was 20 years old. I had remodeled the first house he bought-a one bedroom, one-bathroom house. He’s been a great client since. I’ve done several homes, record companies and publishing companies for him.”

Through artist manager Ken Levitan, Anderson met Steve Buchanan who contracted her work after Nashville’s May 2010 flood had affected much of the Grand Ole Opry’s backstage area and dressing rooms. “It was so sad and the repairs had to be made in such a time constraint. Steve said, ‘I can’t think of anyone that knows more about music and design than you do. ‘ Colin Reed, the CEO of Ryman Hospitality, made my job so easy with his decision-making. I think the success of that project was because it had to be turned around so quickly-the design was instinctive. I have their confidence and that work has led to some great projects. Nashville is a small community and my job involves a lot of that kind of trust.”

Today, Anderson juggles around 30 projects at a time, all at varying stages of completion. At the time of Anderson sat down with MusicRow, her work in development included finalizing the top floors of Alan Jackson’s AJ’s Good Time Bar, Blake Shelton’s Ole Red bar Gavin DeGraw and his brother Joey Nashville Underground a new restaurant in Printers Alley called Black Rabbit, offices for ole publishing and remodeling Starstruck Entertainment and the RCA Studio A complex. Much of those jobs for the music business have involved walking the fine line between paying homage to a rich history while pushing design elements to modern day aesthetics. The challenge of balancing both requires experience and respect.

“For RCA Studio A we did change out some of the fabrics in the studio, but for the most part we did not change the look because [producer] Dave Cobb does not want to mess with any vibe. We just did minor cleanup to get it back to the ’60s. It was built as an office so we ‘re taking the other part of the complex back with a retro vibe that is really simple.”

Anderson often relies on historic photographs as a focal point for her design work, with the help of Nashville historian and preservationist Brenda Colladay, who has helped pull together many of the historical photos used on the RCA project. The two initially worked together on the Opry’s backstage when Colladay was a Grand Ole Opry employee. This interior design involves much more than picking out lamp shades. Anderson’s design work extends from the pre-planning to grand opening.

“There is a big difference between a decorator and designer. With Blake Shelton’s project, we’re ripping up the floors. And you’re working with branding, retail, the chefs and menu, entertainment, and listening to the needs, considering the hours of operation and trying to create the vibe of’ Blake Shelton.’

“Each project is different. There are many working sessions with the architect up until the time you document the project and issue it to the contractor. Roughly 75 percent of the time we take the lead with concept and design in those meetings with the client and we’ll bring in an architect for engineering drawings and codes.”

With three decades of projects under her belt, Anderson is coming full circle, revisiting past projects on second renovations.

“It’s so fun to walk back in to those spaces because for the most part, they still look pretty good,” said Anderson. “And that’s the biggest compliment for me is creating environments that stand the test of time. I try not to pay too much attention to trends. I focus on the right design for the client. Like people making music, it evolves over time. I’m also swayed by the sources, new materials or even new employees. That’s why I love having new designersbecause we inspire each other.”

That level of involvement between clients, reps, architects, engineers and construction teams requires an incredible commitment to communication and coordination. “It’s a lot to put a project together,” said Anderson, mentioning fire ratings and codes. “So my door is always open. I’m my client’s advocate.

“With Alan, I’ve worked with him in the past with buses, planes and several houses for him through the years, so I know him a little bit, which is really helpful. But I’m working more through Debbie Doebler, his manager. He bought The Wheel, so we’re really cleaning it up and branding it Alan, so it’s a ‘little different from Blake’s project with a major renovation.

In 2014, Anderson purchased her own multi-level property on Second Avenue North to house her company’s four designers, interns and library of materials. Her husband, songwriter/producer David Malloy, maintains a recording room downstairs and the couple plans to move in to the top-story apartment.

“The energy this town has is so inspiring,” concluded Anderson. “Have you been to Gray & Dudley in the new 21C hotel next door? It’s such a young town with great new ideas. I walked in the Thompson Hotel they just built in the Gulch. They did a great job … I love good design. A lot of times too I walk into some new places and think, ‘Oh my gosh I would not have done that.’ So there’s both sides to that. Sometimes my friends will hesitate to invite me to their homes, and I say, ‘I’m not coming to see your house, I’m coming to see you.’

“I just love the growth of Nashville. When I started in 1988, you had to convince people to think about the importance of design. Now people realize good design brings people in to a space and makes your life better.” MR

Click here to for the online exclusive article and images.