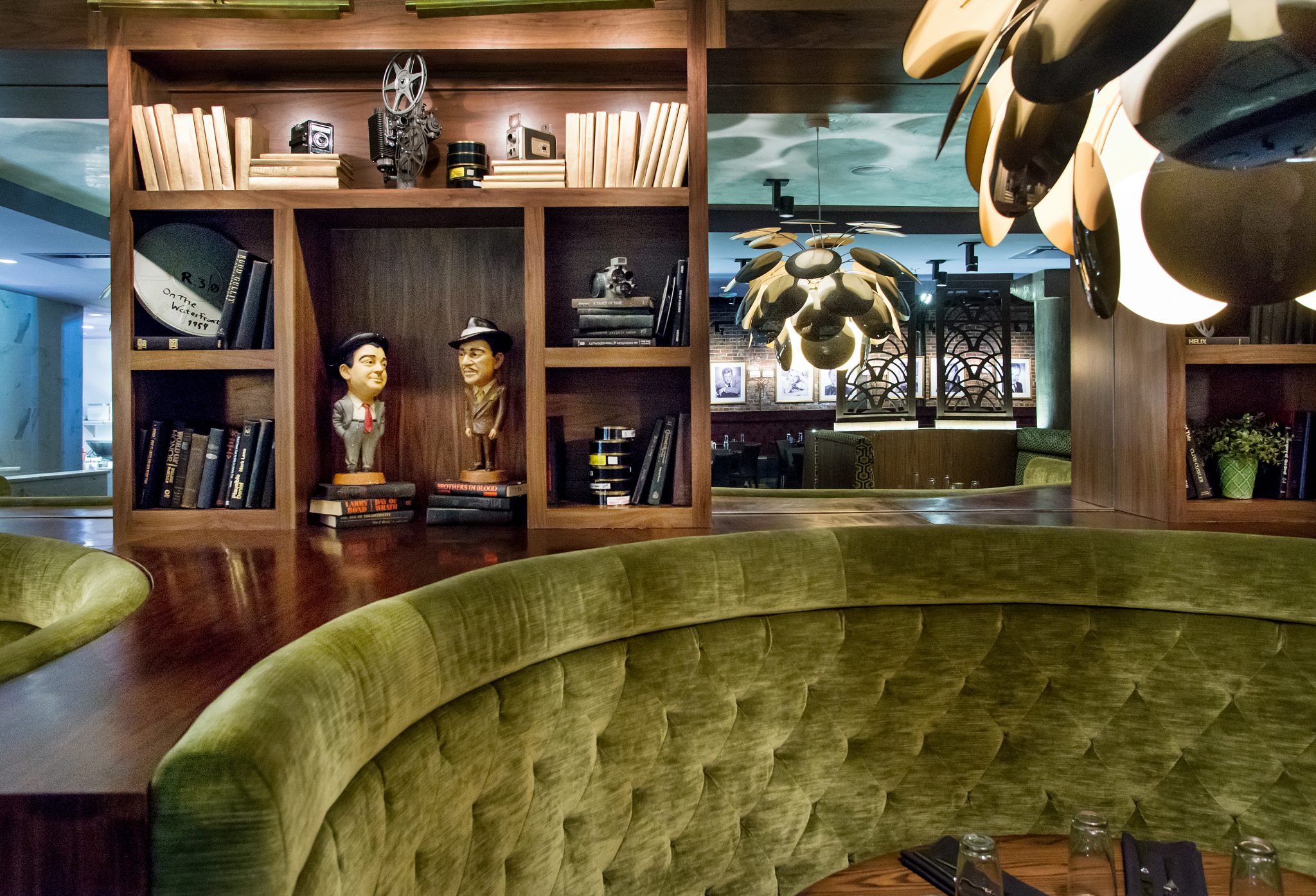 ONE OF THE MUSIC CITY’S MOST RENOWNED INTERIOR DESIGNERS EXPLAINS THE PROCESS BEHIND CREATING A THRIVING DOWNTOWN HOTSPOT.

Nashville’s downtown scene features plenty of lively honky-tonk bars and creative independent restaurants, but according to interior designer Kathy Anderson, there has been one element missing from the vibrant city: a fancy destination where people can go for special nights.

“We have a lot of noisy restaurants with reclaimed wood, but not somewhere you go for a celebration,” she says. That’s where the owners of Sinema Nashville, Colin Reed, his sons Sam and Ed Reed, and their long-time childhood friend Q-Juan Taylor, got the idea for the restaurant they planned to build in the historic Melrose Theater building.

“That was the concept [of Sinema],” Anderson says. “But then [the owners] also wanted it to be a neighborhood place to gather, and so the project was about how we bring all of those things into that space without one disturbing the other.”

To make this challenging juxtaposition come to life, Colin Reed, also the CEO of the Ryman Hospitality Group, which manages the Grand Ole Opry, tapped Kathy Anderson. The Nashville-based designer had previously worked with Reed when she renovated the backstage dressing rooms and redesigned the front door at the Grand Ole Opry House after the 2010 flood that destroyed the facilities.

But even for an experienced designer, transforming the bones of an old theater into a fine-dining locale was a challenge. The 8,000-square-foot space had never housed a restaurant, and so much of the early work was installing the plumbing and gas lines for the kitchen and bar and then determining how to create a luxurious but functional space.

“Like with any project, it started with listening,” Anderson says. “What are [the clients’] goals and desires? What do they want to accomplish? Then I learned about the chefs and food the restaurant would serve. What I was really creating was an environment for the experience to happen, and the interior and the menu need to relate and talk to each other.”

Sinema’s menu features classically inspired dishes with modern twists, so tying the high-end atmosphere together with contemporary design elements was a must. With the building’s long history, it made sense to develop a theme out of cinema and old Hollywood.

“It was kind of like, how do we bring back the glory of the old theater?” Anderson says. “Because in the 1940s to go to the theater, people dressed up, and it was an exciting thing to do. We really wanted to bring back that feeling.”

The space already featured a large gold mirror. Despite its age, the piece captured the glamor needed for the design and tied into the glitzy Hollywood feeling Anderson was trying to create, so she kept it to incorporate into the new design.

Anderson then fused bold patterns, luxurious fabric, rich jewel tones, round booths, and photos of Hollywood stars throughout the first floor of the building. The original curved staircase was also kept, but the old railing was replaced to bring the building up to code and to add more of the Art Deco vibe she was trying to create.

The second floor was designed as a lounge with homey accents to make a fun, atmospheric hangout with quiet nooks for conversation. There, Anderson used sofas, table lamps, and throw pillows to make a comfortable, inviting space. Photos of rock stars adorn the walls as well.

With the building’s long history, it made sense to develop a theme out of cinema and old Hollywood.

The women’s restroom is designed as a fancy backstage dressing room with ambient lighting and seating, creating an exceptionally lavish space that Anderson hopes will inspire visits, much like the nearby famous Hermitage Hotel’s men’s restroom that is visited by men and women alike.

The restaurant features an open-air kitchen, for which Anderson consulted the executive chef, Kyle Patterson, as early as possible. She believes that bringing chefs in at the beginning of the design process is vital to the success of restaurant design.

“We had started on a concept before they brought the chef in, and we made a few equipment adjustments to suit the way the chef liked to work,” Anderson says. “He likes to stand at the counter as the food comes up and stage everything, so we built a wall hiding the service counter, so he would have a place to stand that wasn’t in the restaurant.”

Now, with the renovation complete, all of these elements combine to create a functional and luxurious space that immerses visitors in the glitzy world of old Hollywood right in the heart of Music City.