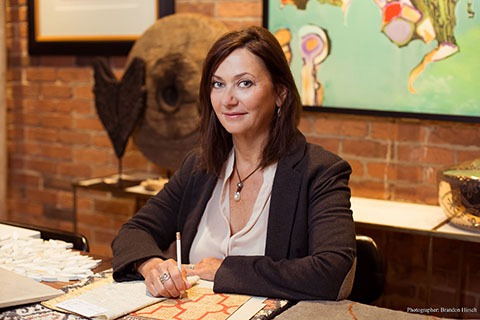 Tucked into the heart of downtown Nashville is Anderson Design Studio. I arrived at its tall, sleek storefront, pushed the bell, and peered in looking for Kathy Anderson, the talented interior designer and owner. The studio is in an old brick building at the top of Second Avenue and fits well into the busy location.

After being greeted by one of Anderson’s vibrant assistants, I found her at the coffee pot in boots and a long, suede jacket.

“Do you want some?” she asked. It was hard to tell if I was in her office or in her home. The studio feels like a home. The desk space, chic and efficient, is surrounded by soft fabrics, warm lighting, and exposed brick.

The top floor has been converted into an apartment that is illuminated by natural light through tall windows and a skylight that she added in the ceiling, the structure of which was already there.

“We just added the glass,” Anderson said. She has an innate eye for design, but she also grew up with a father who renovated houses. He involved her in the projects as a kid, so early on, Kathy developed an understanding of how space could be shaped and redesigned. A career in interior design was probably a natural progression for her; however, starting her own company was an unexpected challenge.

When her first son was barely a year old, Anderson made the leap from working in architecture firms to opening her own studio.

“I wanted to be independent so as to better serve the client,” she said. Twenty-eight years later, she wouldn’t change a thing, though she quickly discovered the trials of having a creative brain while running a business. She admitted that management duties pull her away from beloved creative tasks. If she had one “wish,” it would be access to a company that “manages independent businesses.” Anderson is interested in someone on a contract basis who can help with tasks, such as billing, only when needed. This makes sense for a small business owner who does not need a full-time manager.

Though owning her own business requires added executive duties, it also gives her the freedom to implement her creativity on her terms. Unlike other designers, who most often specialize in one area, Anderson is able to take on projects in both the residential and corporate fields. She loves designing homes; often those clients become friends. Residential projects can be more emotional than corporate ones. Since a project can easily span the course of a year or more, Anderson becomes part of her clients’ lives, sometimes going through big life changes with them. These changes are not always pleasant or welcomed, but Anderson said she can help a little “by making sure the client has a space that brings them comfort or fits their needs at that time.”

Yet she also relishes in designing spaces that the public can enjoy, such as spaces of community and hospitality. She designed the popular and fashionable restaurant Sinema, which was built inside of an old movie theater. The bottom floor of the restaurant is a fine dining venue, while the top floor, accessed by the original grand, curved staircase, is a lounge area with plush seating and low, sultry lighting.

One of her most satisfying projects was designing the backstage of the Grand Ole Opry after it was destroyed by a flood in 2010 which consumed most of Nashville. Because this was a project of rescue and recovery, decisions needed to be made faster than on normal projects. Everyone rallied together quickly, restoring a country music icon. With wood finishes and a punched tin ceiling, she paid homage to the Opry’s heritage. In sentimental contrast, she included an iron marker on the wall, commemorating the height of the flood line in the Opry (part of its new and continued history).

Being married to a songwriter and having many musician friends, Anderson understood that the musicians who use the Opry’s backstage need to feel comfortable. She emphasized that the space around you affects how you feel, so whenever she takes on a new client, the first thing she does is listen.

“Being a good designer means being a good listener,” she said. She pays attention to how a client lives, works, and uses space. She works with a client to ensure satisfaction, and she trains her other designers to do the same. Anderson’s business has grown to include four other designers. Anderson prefers office spaces that “bring everyone together instead of being separated and closed off from each other,” and her own office space for her employees does just that. She added, “Usually, the employees need each other to best do their jobs.”

Of course, Anderson’s own home falls last on her priority list. Like many people, she’s not inspired to do job-related duties while at home. Not only that, her house is sometimes treated like another showroom from which she may pluck items for a design project. She told a story about a Michael Kalish piece she once owned, a depiction of Jimi Hendrix, which incorporated license plates for the image. She liked the artwork, but while working on Kid Rock’s house, she decided that his project needed the Kalish piece instead.

Then she laughed about how her bed at home currently needs a headboard. “There’s pillows up against drapes,” she said. “You can’t even sit up and read!”

But if there’s one thing Anderson has learned throughout her career, it’s to be realistic. Clients usually have expectations about a project concerning time frame, budget, and getting exactly what they want. She warns of those three to “pick two.” Having all three is virtually impossible.

Her own life is one of balance: the balance of residential and corporate projects; the balance of designing a space’s efficiency and its aesthetic; and the balance of thinking creatively while managing effectively. Even though, Kathy admitted that her home falls last on her priority list, she said it’s still an organized space. She couldn’t function in chaos.

Kathy Anderson works hard, and through all of her success, it shows. She deserves a place to lie back and relax in her own home. As we wrapped up the interview, Anderson said, “You know, maybe I’ll go get that headboard today.”

I have a feeling she didn’t, but I hope that one day, she will.